This is the Sample plan for making your customized tour.

The customized tour will made based on this Self-guided Aso & Takachiho 3 days tour,

please send an enquiry for making the customized plan, and then all the detail

including accommodation, meals and activities will be organized.

The dynamic nature of Aso and Takachiho where is spreading around Mount Aso.

has a fairly large caldera which is one of the largest caldera in the world, 25 km north-south

and 18 km east-west with a circumference of around 120 km, although sources vary on the

Transfer to Aso by Limited express train from Kumamoto to Aso station,

Transfer to JR Kumamoto station by a chartered taxi

Transfer to Fukuoka by Bullet train from JR Kumamoto to Hataka station, 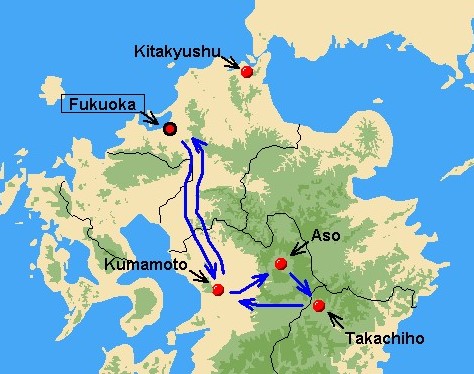 Home  Our Services   About us   Contact us   Kyushu Travel Guide