Beppu is one of the most famous Onsen resort in Japan. The popular hot spring town nestle

at the foot of volcanos, Mount Yufu and Mount Tsurumi. Boasting more than 2,800 hot spring

sources and flowing rate of nearly 137,000 kiloliters per day, Beppu is considered a paradise

Option : the following sites can be arranged as an option.

Hell (Jigoku Meguri ) tour that is a collection of hot spring where the water bubbles forth from
underground, often with unusual result.  Seven of the hells are located in the Kannawa district
where over 4 km northwest of Beppu station, and two in the more remote Shibaseki district.

1200 years ago after a volcano explosion.

Have you tried Foot bath before?  Foot bath is called Ashiyu in Japanese and is a public bath in
which people can bath their feet. Ashiyu in Beppu set up at Kannawa Onsen near the Hell tour spot.

that offers some decent hiking, rare flora and outstanding vistas. Visitors can take a ropeway 800

metres up and revel in being surrounded by acres of rolling greenery. You can see as far as the

Kuju Mountains, a famous mountain range that runs between Oita and Kumamoto-prefectures. 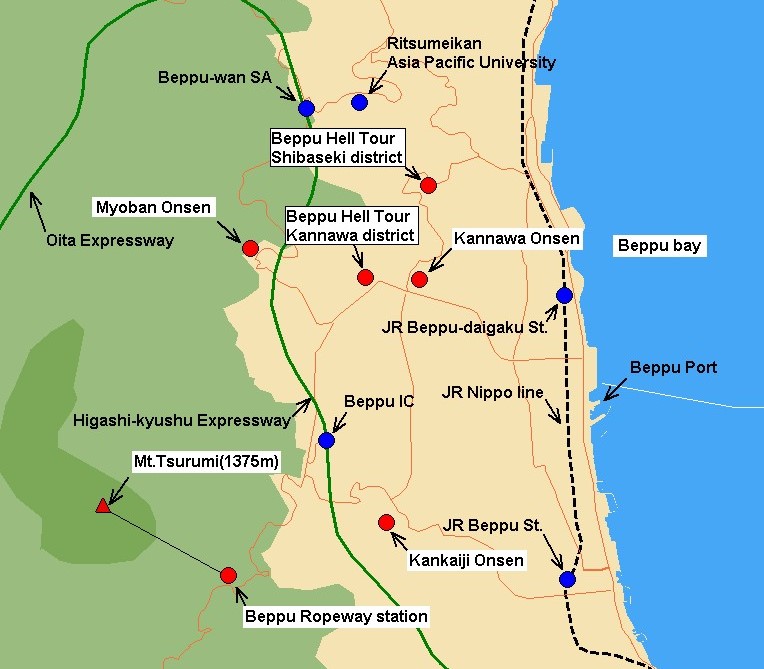