Make an Enquiry    How to Book

Exploring throughout Kyushu where is the fascinating destination of Japan like no others.

Where to explore are Nagasaki, Shimabara, Unzen, Kumamoto, Ibusuki, Kagoshima,

・Accommodation, to be selected from budget hotels to luxury properties

Exploring Nagasaki by the use of Tram, stay in Nagasaki

Day 4 : Transfer to Kagoshima by JR Shinkansen and to Ibusuki by JR Limited express train 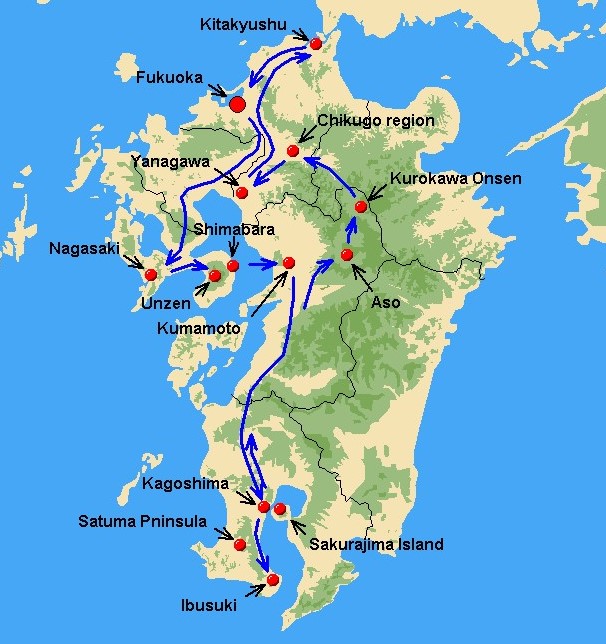 The city in harmony with foreign countries cultures

Nagasaki-city has many oversea countries cultures and the significant Japanese

histories like no other areas. The fascinating Nagasaki-city has been created since

needed the tour, and then take you to JR Hakata station.

Transfer to Nagasaki by JR Limited express train from Hakata to Nagasaki, 2 hours

Exploring Nagasaki, Tram is used for the following sites

Check out Hotel in Nagasaki

Drive to Unzen via Nita Pass by a Private car

Kumamoto is the third largest city in Kyushu with a population of 740,000.Must visit place is

Kumamoto Castle listed on the three great castle in Japan.

The city is situated roughly in the center of Kumamoto-prefecture, is the government and

economic center of the prefecture. From the early 17th century to the end of the 19th

century, Kumamoto was prosperous as a castle town. The Shira-kawa River and its branches

run through the downtown area around Kumamoto Castle. Therefore, the city is called “City

of Forest and Fresh Water.”

Transfer to Shimabara port from Unzen by a Shimatetsu bus, 30 minutes

Transfer to Kumamoto Castle from Kumamoto port by Sanko bus

Kagoshima-city, making up the south-western section of Kagoshima-prefecture. The peninsula

Enjoy the sand bath at Ibusuki

Check out Hotel in Ibusuki

Transfer to Kagoshima, from Ibusuki to Kagoshima-chuo station by JR Limited express train

Private car is used from JR Kagoshima-chuo station for exploring

from Aso and is steeped in Japanese mythology. It is the supposed site of legend where

Amaterasu, the Shrine Sun Goddess, disturbed by her brother’s cruel pranks, hid herself in

a cave, prompting the other gods and goddesses to try and lure her out.

Check out Hotel in Kagoshima

Transfer and exploring Takachio by the use of a Private car

Transfer to Aso and stay Aso

largest caldera offer a lot of excitements. And numerous unforgettable experiences in

the rural area can be made including Onsen, variety of sports and local cuisines.

Check out Hotel in Aso

Exploring Aso by the use of Private car

Check out Hotel in Kurokawa Onsen

Exploring Chikigo region by the use of Private car

Lunch at the featured restaurant Shirakabe

A beautiful canal town Yanagawa, Canal boat cruise can be enjoyed while experience the

the Ariake Sea through the Chikugo River and Yabe River. People started to live here since

Check out Hotel in Harazuru Onsen

Transfer to Kurume by JR Chikugo-yoshii to Kurume station by a local train, 40 minutes

Transfer to Kurume by Nishitetsu train from Yanagawa

Transfer to Kitakyushu by a Shinkansen from Kurume to Kokura

Kitakyushu is the second largest city in Kyushu with a population of 940,000. The city is the
Industrial Innovation city greatly contributed to Japan’s Industrial modernization. Now the city
offers a lot of sightseeing spots such as scenic beauty places, UNESCO World Heritage site,
industrial heritages placed introduce cultures of people living there, and various historic sites.

A long history as commercial town and castle town, and prospered as important district to Asian

Continent for many years.   Now, Fukuoka-city is the International bub of Kyushu, the nation’s