Saga-city in Kyushu is the seat of the Saga-prefectural government. It faces the Ariake

Sea on the south and is home to Saga Airport. In the center of the city is the Saga

Castle History Museum, which also serves as the city’s symbol. The castle itself is

no longer standing, but the main keep has been reconstructed, resulting in one of the largest

wooden structures in Japan. Saga is also known as the place where it has made a great

contribution to the Japanese Industrial Revolution.

building in Japan at 2,500m2, the museum offers the unparalleled chance to experience a Japanese

castle from more than 175 years ago.

The shrine is designated as the special government shrine. The shrine dedicated to Naomasa

Nabeshima, who oversaw the manufacture of Japan’s first modern Cannon.

the Mietsu Naval Dock served as a venue for naval drilling and maintenance of Western-style ship,

as the naval base of Saga Clan. Japan’s first practical steam ship, the Ryofu-maru was constructed

Cannon manufacturing. The reflectance furnace was greatly contributed for initial stage of

The largest archeological remains in Japan. Lie on the spacious hilly area in the north-eastern

part of Saga. Remains of a ringed-dugout settlement presumably dating back to the 3rd century

B.C. were unearthed there, and excavation is still underway at the site.

from all over the world. 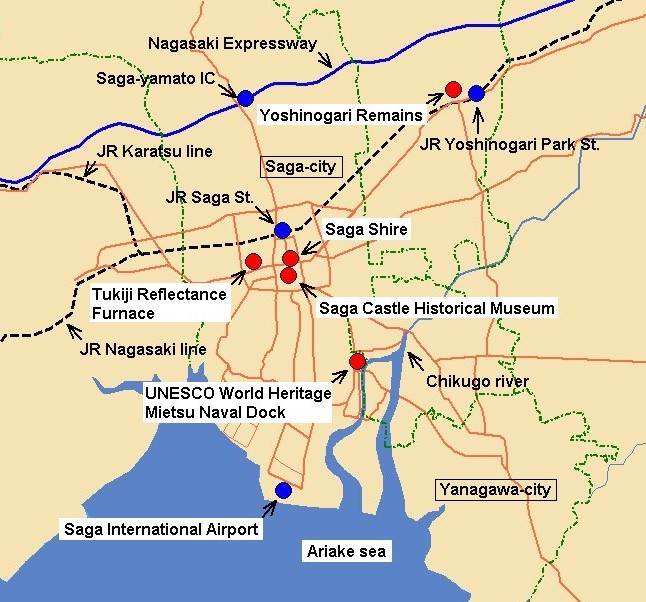