Amakusa, is located in a southern part of Kumamoto-city, and consists of Shimo-jima,

Kami-jima and many other islands varied in size, which belong to Unzen-Amakusa

National Park along with Unzen.

scattered across the sea.  Amakusa has the Christinan Pilgrimage sites where Christian faith

continued even during the ban on Christianity, Sakitsu Village has been registered on 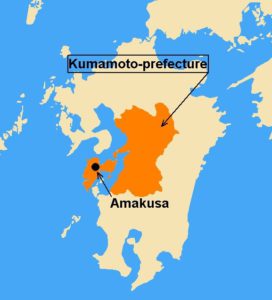