The Industrial Innovation city where greatly contributed to Japan’s industrial modernization.
And also is blessed with spectacular & stunning natural feature. The tour explore the many
featured places in Kitakyushu-city. 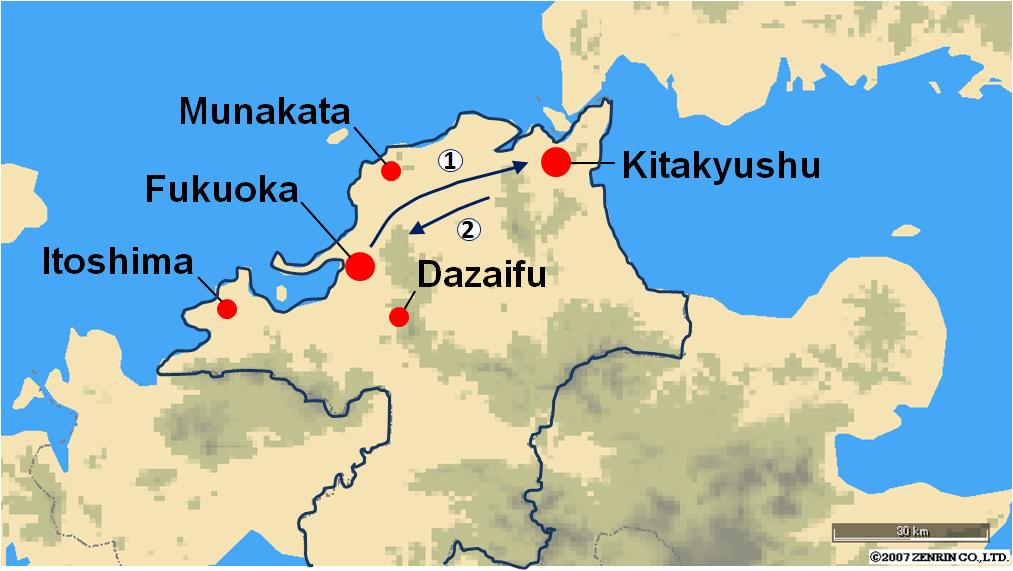 Konamon Pedstrian tunnel : cross to the Shimonoseki on foot

Since then, the Works greatly contributed to Japan’s industrial modernization. The three sites in

Built in 1899, ahead of production facilities. It is an architectural fusion of Japanese and European

design, a two story red brick building with bilateral symmetry and a central dome set in a Japanese

to visit in 2019.  And the Photo of Kokura Castle is used for introducing Fukuoka-prefecture

Kokura Castle is one of the most famous land marks in Kitakyushu. The construction was

commenced in 1602 and spent 7 years to completed it.

large ships a day passing through it. The Kanmon Pedestrian Tunnel, which enables people to

Lunch, local cuisines to be slected from the following

(stone roof tile) and dipped into a special sauce when eating it.

with cheese and/or egg heated in oven. The melted cheese and soft-boiled egg combine with the

spicy curry to enhance its flavor even more.

Kitakyushu is the dynamic city where one million people are living and working, is creating

the beautiful Night view which you have never seen before. The night view from the mount

Sarakura is chosen the three major Night View in Japan. The area of Night view is the largest

in the World ; about 40km east to west and 10km south to north and also the number of

lighting to create the night view is the largest in the World.

Shikoku Karst. It is located in southeastern part of Kitakyushu-city. At altitudes between

and annual production volume is 430,000 cars.  Assembly line and Inspection line are visited

at the factory tour.

The first-class civil construction heritage completed in 1927, the triggered the registration

of World Cultural Heritage of Sites of Japan’s Meiji Industrial Revolution.  The Kawachi

Reservoir was constructed for the industrial water supply to Yawata Steel Works. The dam