It is a thriving area of agriculture in Chikugo region, Fukuoka-prefecture  where has rich nature

and many historical heritages. And also there is a Onsen Resort along the Chikugo River.

The modern city of Asakura was established on March 20, 2006, from the merger of the former town

of Asakura, absorbing the city of Amagi, and the town of Haki. Asakura is located in south central

Akizuki is a former Castle town located in northern part of Asakura. You can enjoy the harmony

A tranquil Onsen Resort near Fukuoka-city and is located on the banks of Chikugo River.

Asakura is the only area in Japan to use water wheels for irrigation. The irrigation system used the

Triple Water Wheel was completed in 1760. The water is supplied from Yamada weir in Chikugo

through the canal to the Triple Water Wheel. And then the water distributed to each rice field by

Only here in Japan,  the stone-covered Weir constructed. Yamada weir is a construction for the

Triple Water Wheel to rice field. The large and small stones are stacked against water flow, and

leads water to the irrigation canal while suppressing the momentum of the Chikugo River.

The apiary collecting honey while traveling with bees from Kagoshima to Hokkaido. The Apiary

honey, both of which have a deep and sophisticated taste.

Toho is a small village with a population of about 2,000 people and consist of two districts.

The main exhibit room displays a few letters and other items of kamikaze pilots who died in battle.

information on each pilot: name, unit, plane used, date of death, and air base of final sortie.

In the harvest time, the northern Kyushu boasts many area with beautiful fruit orchards.

Fukuoka is one of the leading fruit-producing prefecture in all Japan. The fruit production

in Fukuoka is primarily concentrated in the southern Chikugo region such as Ukiha, 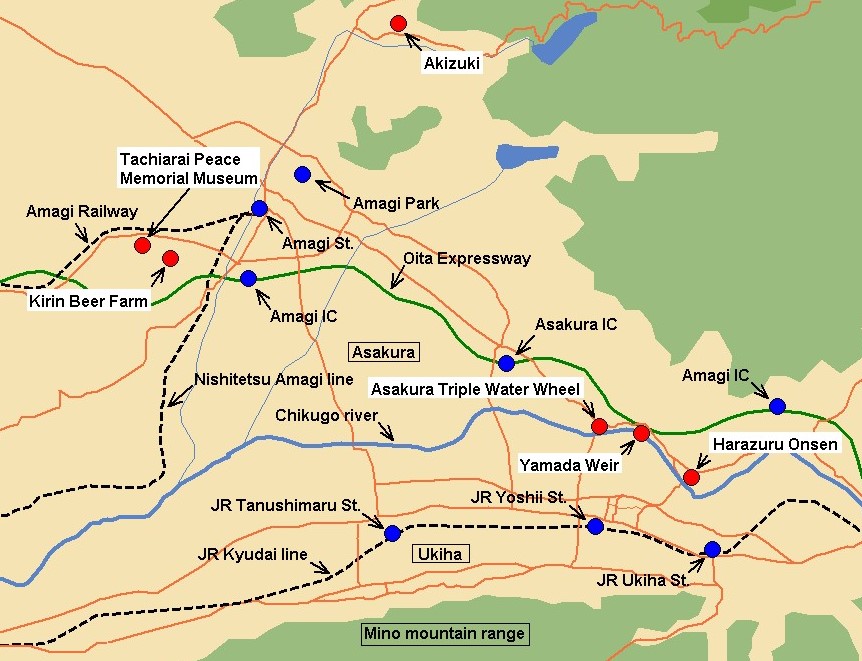