The city is blessed with spectacular & stunning natural feature, about 960,000 people are living

in the area spreding in river basins where surounding Sea and mountains.The coastline belongs

One of the three largest Karst Plateau in Japan. It is located in southeastern part of Kitakyushu-city.

and 2 km from east to west.

Kitakyushu’s landmark Kokura Castle. Fukuoka–prefecture only in Japan is selected by

CNN Travel as one of the top 19 places to visit in 2019.  And the Photo of Kokura Castle is

used for introducing Fukuoka-prefecture. The Castle located within a walking distance of

Kokua Castle Garden made at the former site of lord’s guest house, located next to Kokura Castle.

This garden consists of a Japanese garden and a lord’s house, a building of the style of Japanese

domestic architecture. In this garden, not only can you see Japanese traditional architecture,

but also enjoy the Tea Ceremony at the Experience Zone.

Typical Japanese market, known as “the kitchen” in Kitakyushu-city.  There are more than

120 shops in the 180 metre-long arcade. Here you get a true taste of the culture and sample

the real life style  of the people living in Kitakyushu. You can find fresh, inexpensive fish,

vegetables and meats, as well as local specialties.​

and Uomachi Gintengai is the birth place of Japanese arcade shopping street constructed in 1991.

Now, there are many kind of fantastic shops and restaurant along the street.

It was built by the Mitsui Co., Ltd in 1921 as a reception centre and to provide accommodation for

here during his visit to Japan with his wife in 1922.

The shopping area in the Mojiko Retro district located by the sea. “Full of a romance market which

stir up forgetting contentment” is the direct translation of the concept Kaikyo Plaza is based on.

together with Tokyo Station. Mojiko Station is a beautiful station built in the Renaissance

style and modeled on the Termini Station in Italy.

Situated on the 31st floor of the high-rise apartment building “Retro Hi-Mart”.  The 103 metre-high

observatory offers magnificent views of the Mojiko Retro district, the Kanmon-kyo Bridge over the

Kanmon Strait, as well as the Shimonoseki area.

large ships a day passing through it. the Kanmon Pedestrian Tunnel, which enables people to

The first-class civil construction heritage completed in 1927, the triggered the registration of World

Cultural Heritage of Sites of Japan’s Meiji Industrial Revolution.  The Kawachi Reservoir was

constructed for the industrial water supply to Yawata Steel Works. The dam was constructed at the

Okura River and upper stream of the dam was expanded and making the 7milion cubic metre reservoir.

The only remaining lenticular truss bridge in Japan  ( lens type truss bridge), located at the
south side of Kawachi Reservoir and it was designed by Hisanori Numata.  This shape and
color really harmonize with nature and become a symbol of the Iron town Yahata.

Built in 1910 on the east bank of the Onga River. It served, and still serves, to deliver industrial

water to Yawata via an 11.4 km pipeline. The site has been registered on the UNESCO World

operation in 1901, and is now the world’s leading environmental future city. Now it is called

industrial and environmental city which is representative of Japan. Therefore the various

things can be learn here.

on a Kawara (stone roof tile) and dipped into a special sauce when eating it.

The place is located on the ground floor of JR Kokura Station. There are 8 restaurants

where local cuisines can be enjoyed. 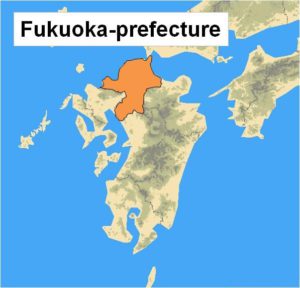 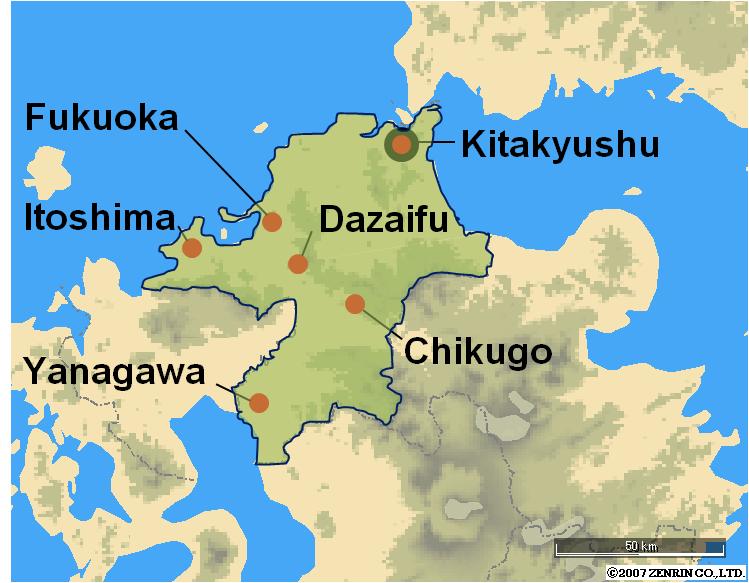