Long ago Japan was divided into many small provinces. The lords of each province fought to take

each other’s territory. Castles were built by the lords to show off their power and control their provinces.

They were both residences and military bases. They were made of wood, but used various defensive

devices for protection. For example, moats were built around some castles.

Additionally, many castles were built on plateaus or hills. The slopes were then steepened, making

them difficult for enemies to climb. In some castles the grounds from the gate to main building were

The main castle building is usually in the center and is called the Tensyukaku (Castle tower).

They are tall and magnificent structure. The loads and their immediate servants lived in the Tensyukaku.

Kyushu has rich landscapes including nature and diverse cultures including food cultures.

And also, Kyushu is known as ‘Onsen island’ and there are many Onsen resorts to stop into

while you’re travelling around.

The festival is held on Komonji dori Avenue in front of Kitakyushu City Government  Office on the
first Saturday and Sunday of August ( August 5 and 6 this year).

On the first day (Saturday)，after the opening ceremony parade, festivals representing each of the
old cities assemble to join the parade and excitement grows among all the festival participants and spectators.

On the second day (Sunday)， the Million Dance is performed around Kokura Castle by one and half million citizens who come from local companies and town groups，wearing themed festival costumes.
They dance and dance, enlivening and energising the festival.
One of the greatest highlights is the firework display，this spectacular show marks the finale of the festival.
・Venue : Komonji Avenue and Katsuyama Park Kokura kitaku

Hakata Dontaku Festival, the name Dontaku is a corruption of the Dutch word
Zontag, meaning Sunday.
The festival is said to have started as a New Year parade of merchants going
to the local lord’s residence to celebrate. It is held on May 3 and 4 in Hakata,
Fukuoka-city. 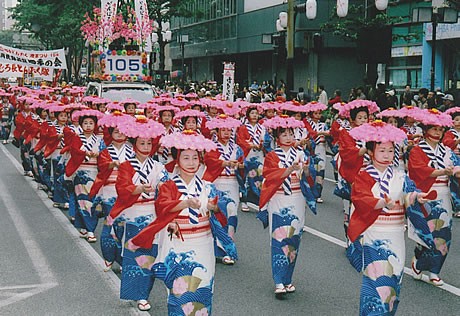 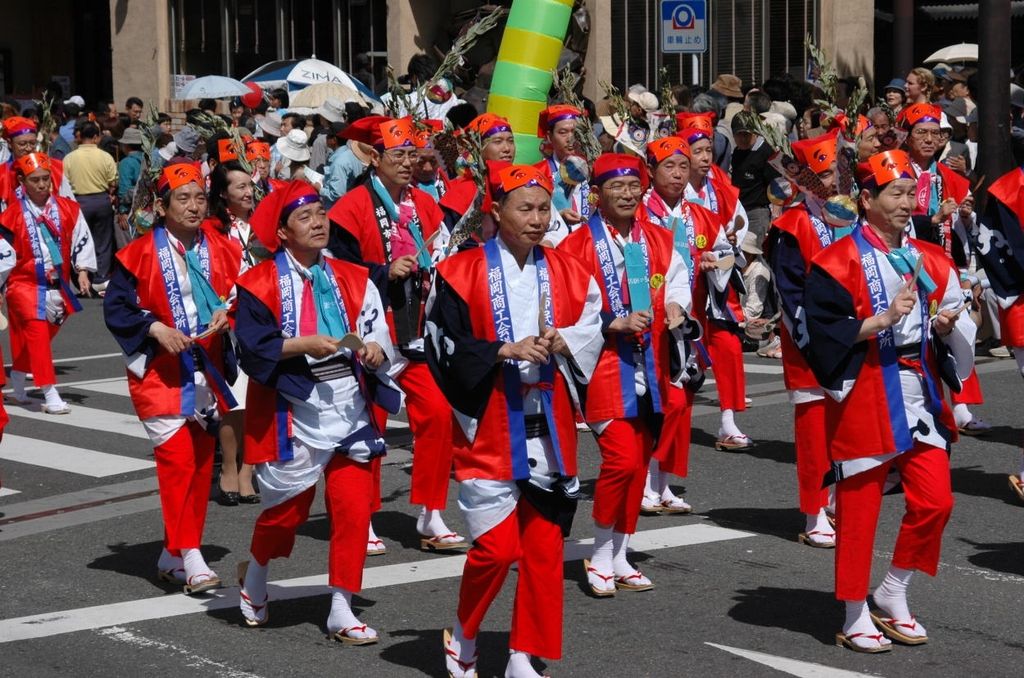 About 30,000 of local townspeople take part, and its attractions include the
traditional Matsuribayashi parade, a fancy-dress parade and a shamoji band.

Matsuribayashi is a parade of children and adults intraditional dress, led by the three
gods Fuku-no-Kami, Ebisu and Daikoku, on horseback.
The kasahoko, a float that forms part of the Matsuribayashi parade.
It is believed in Fukuoka that babies carried under the kasahoko will grow up strong
and healthy.
The shamoji band parade around the town beating time with the shamoji, the wooden
spatulas used for serving rice.

Tamaseseri, a lively New Year’s Festival held on January,
at Hakozaki Shrine in Fukuoka-city, including a traditional form of fortune-telling. 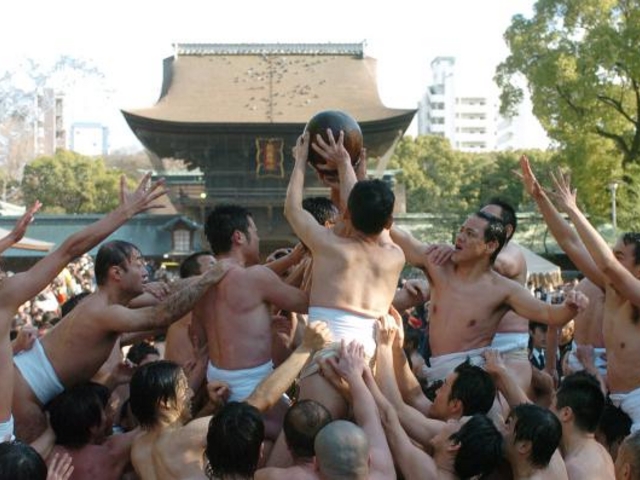 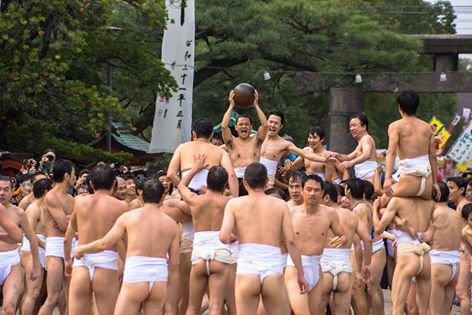 Several hundred men wearing lion cloths compete on piggy-back in
two teams, the “sea” team and the “land” team team, for possession of
a wooden ball.

If the sea team wins, a bountiful fishing catch is predicted for the year;
if the land team wins a rich harvest is predicted.

Hojoya is the festival held Hakozaki Shrine to celebration of all living creatures.
It has a history of over 1000 years. 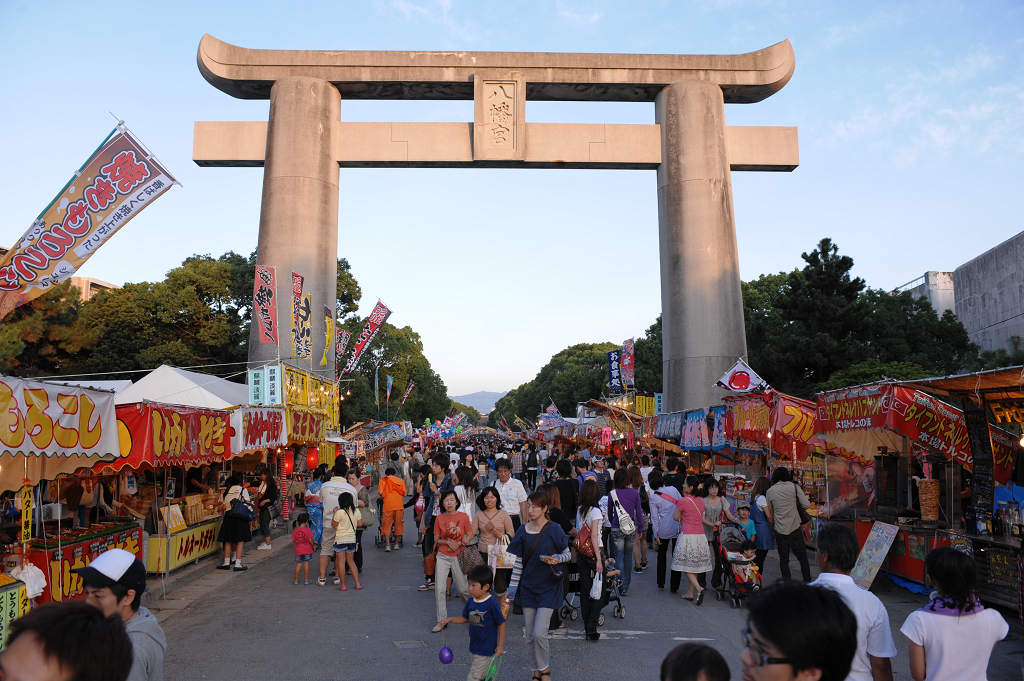 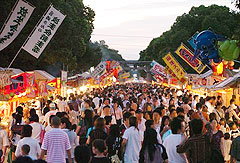 Hundred of doves and carp will be released on September 18 in reverence
of all living things, a solemn mikoshi (shrine) procession take place
on the 12th.

Most visitors are usually happy just to amble about, doing little more than
munch on grilled food, gulp cold beer and amuse themselves with
traditional sugar-cutting or goldfish catching games.

Join the cheerful crowd in colorful yukata and experience a rare, unhurried
slice of old-time festivities in Fukuoka.

Sumo is a Japanese traditional martial art, which is the match of two Sumo
wrestlers in the round ring called Dohyo.
The winner is one who first makes his opponent step outside of the ring or
into touching the ground with anything other than the sole of feet,
there are 48 wining techniques.

One of our most proud things in Kyushu is Japanese cuisines and local delicacies. You can enjoy

many different local dishes using fresh and unique ingredients in various places during your travel.

Food stalls “Yatai” is one thing to enjoy in Fukuoka. Despite a decline in recent year,

It is a local cuisine in Fukuoka.  izutaki (boil in water) describes, this is a hot pot dish made

with chopped chickens, negi, and a variety of vegetables put in a pot of water and boiled,

then dipped in ponzu sauce.

Genkai Sea can be enjoyed.

Itoshima oyster growing up in the rich nature of mountain and sea. There are many Oyster

Barbecue Huts at five fishing harbours. The huts only open during the season, from end of

October to March or April.

Yanagawa is the birthplace of Steamed Eel that has more than 300 years history. There are many

Yanagawa is facing to Ariake Sea where many fresh and unique fishes are caught. Japanese

The chef who makes that cuisines also has experienced the imperial family’s cook.

The restaurant Shirakabe is in the former merchant’s building constructed in 1928. Japanese

cuisines using best local ingredients that vary by season can be enjoyed.

Chilugo region is one of the famous place for Eel cuisines along with Yanagawa. Shogetu is the

renown Eel restaurant located in Asakura along the Chikugo river side and established 70 years ago.

to the Sake brewery Kitaya. The restaurant opened in 2014 and serving Japanese cuisines

which is compatible with Sake using local abundant ingredients such as vegetables, fruits and

Famous for fresh Squid, transparent in body and firm in texture. The squid has a sweetness that melt

upon the tongue. In the finely crafted style of sashimi known as Ikezukuri, the flesh of still-living

Saga beef is esteemed as one of the best Wagyu beef brands in Japan. The cattle used for our

meats are fattened in adherence to the regulations of the Japan Agriculture Co-operative, and

we use only Japanese black cattle registered with their cattle traceability system.

Takezaki crab is the local specialty of Tara, and is well-known for its rich flavor. Takezaki crabs are

available almost year around. From summer into fall the male crabs are delicious, with the females

and their eggs most delicious during the autumn and winter. You could even try one of each.

Nagasaki China town at shinchi is one of the big three china town in Japan.  There are about 50

Guzoni is said to created during the Shimabara Rebellion of 1637. When Christians were fought

under the leadership of Amakusa Shiro, they brought various ingredients such as rice cake, fishes

and vegetables, and made a stew.   This is the origin of Guzoni.

It is a local cuisine in Obama Onsen resort, made of noodles, seafood, and vegetables. The feature

Chanpon. Shrimp are found in abundance along the beaches near the Onsen, and a special soup

is made from them.

with just the right amount of fat, combined with great taste, tenderness and healthiness. Aso Akaushi

topped with Akaushi beef and egg.

Seiro-mushi is prepared with large bamboo baskets in front of diners.

Featured by the enriched flavor with warmth and fragrance of the cypress basket (seiro).

front of you with the traditional local taste of Beppu, Oita-prefecture.

Yufumabushi is a local cuisine which serves really nice BUNGO Beef. But surprisingly, the way

they serve beef is not BBQ or SUKIYAKI style that are seen in most cases, but “Yufumabushi

” style which we rarely see for beef dish.

Nagasaki Kunchi is one of big-three festival in Japan, held on October 7 to 9 at Suwa Shrine.

The festival features Chinese dance including Ja-odori (Snake dance), this time dancing all

around the city but especially at Suwa Shrine. History of the Festival, after Christianity was

harshly suppressed in Nagasaki in 1624, a festival was dedicated to Suwa Shrine, the guardian

god of local people. It is believed that Suwa Shrine festival called “Nagasaki Kunchi” and danced

were offered to shrine with cooperated of local people in 1634.

At the outset, dedicated dance were very simple but gradually became colorful. During Eiho Era

(1673-80), a Chinese dance with an exotic flavor offered to the shrine. The Ja-odori or snake dance