east, and is otherwise surrounded by Seas. It also includes a large number of islands such as

Tsushima and Iki. Most of the prefecture is near the coast and there are a number of ports such

as Nagasaki–city and a United States Navy base at Sasebo–city. The capital of Nagasaki 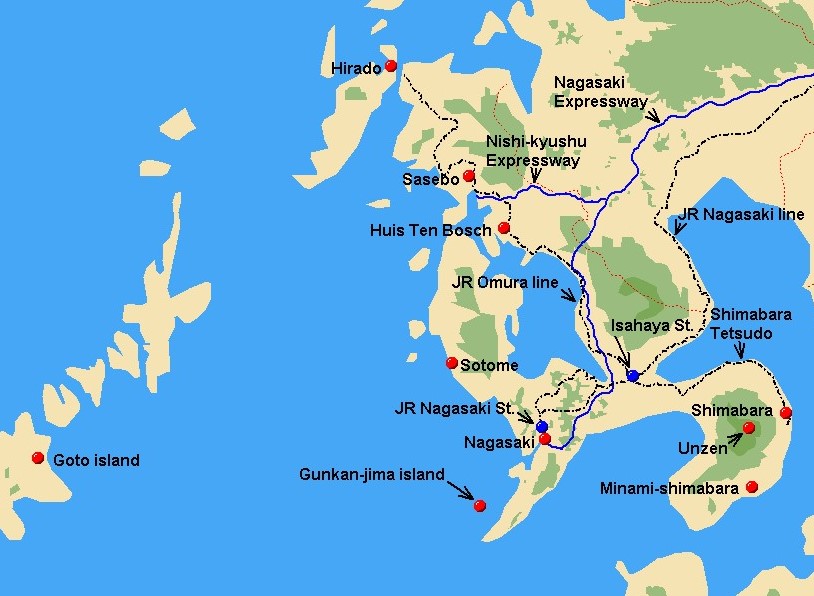 One of Must visit destination in Kyushu.  The city have many oversea countries cultures and

the significant Japanese histories like no other areas.  In addition to above features, the

geographical conditions are creating fascinating tourism and now many tourists are visiting here.

Historical features; the following had experienced in Nagasaki.

two cities on Shimabara peninsula, Shimabara-city west side of peninsula and Minami-Shmabara

city south-west side of peninsula. The region offers various enjoyable things such as Nature, Onsen,

Unzen is a gentle Onsen resort situated in the Unzen National Park. Located in the centre of

Shimabara peninslua, at the southwest part of Mount Unzen with an altitude of 700m. It is started

to Europe and China. The area was the first area to be designated as a National Park in Japan.

Onsen Resort facing to Tachibana bay. Located at western foot of Mount Unzen, and consist of

there are 3 public baths where visitor can use.

The 2nd largest city in Nagasaki-prefecture next to Nagasaki-city. The city includes a part of

Saikai National Park. Located in the southern part of the city is the Dutch-styled theme park

“House in the Woods/bush”.  It is named after Huis ten Bosch in The Hague, one of the three

is known to have visited in 1550. In the 1580s, the Portuguese established a trading station,

followed soon by the Dutch and the British.