Kumamoto-prefecture is in the center of Kyushu, It is bordered by the Ariake inland sea

The capital of Kumamoto-prefecture is Kumamoto-city. Mount Aso, an extensive active

volcano, is in the east of Kumamoto-prefecture. This volcano is located at the center of 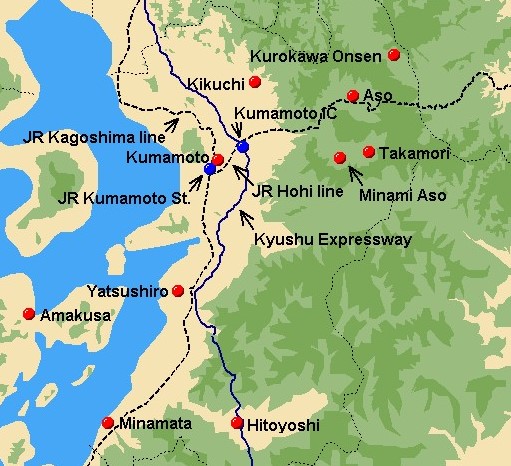 Situated roughly in the center of Kumamoto-prefecture, is the government and economic

center of the prefecture. From the early 17th century to the end of the 19th century,

Kumamoto was prosperous as a castle town. The Shira-kawa River and its branches run

through the downtown area around Kumamoto Castle.

One of the must visit tourist destination in Kyushu. The world’s largest caldera and the active

volcano give a lot of excitements. And numerous unforgettable experiences in the rural area

can be mede including Onsen, variety of sports and local cuisines.

One of the most popular hot spring resort, located on the northern side of  Mount Aso .

old town in Japan, where more than 20 Inns （Ryokan）and gift shops standing in a row

and many other islands varied in size, which belong to Unzen-Amakusa Nationattl Park

along with Unzen. It provides ideal spots for viewing the saw-toothed coast line of

Amakusa and the small islands scattered across the sea. And there are UNESCO World

Heritages of Hidden Christian Sites in the Nagasaki Region

Located in the northern part of Kumamoto along Kuma-gawa River. Hitoyoshi is a castle town
once prosperous as a river port, and boasts the ruins of the Hitoyoshi castle and Hitoyoshi
Onsen. The most exiting thing in Hitoyoshi is Kumasawa-kudari that is riding on a boat
maneuvered by a master polar down the Kuma-gawa River, one of the three fast streams in Japan.

Located in Kumamoto Prefecture, It is on the west coast of Kyushu and faces Amakusa islands.

There are two Onsen resorts ; Yunotsuru Onsen located along the Yuide River in the mountains