of Japan, and has subtropical climate. Where to visit : In Kagoshima-prefecture are Satsuma

peninsula, Ibusuki, Kagoshima and Kirishima. In Miyazaki-prefecture are Nishinan, Miyazaki,

Day 8 : leave Fukuoka and back to home 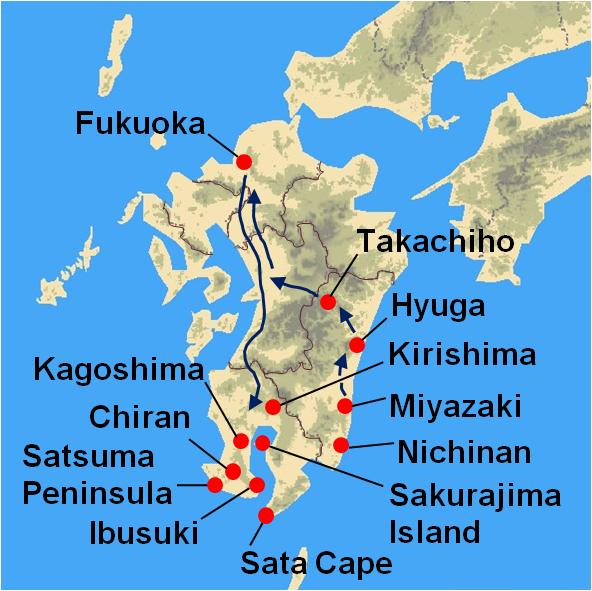 ・For making enjoyable our company staff always assist during tour by

communicating with you using a communication tool such as WhatsApp.

Situated roughly in the center of Kumamoto Prefecture, is the government and

economic center of the prefecture. From the early 17th century to the end of the

19th century, Kumamoto was prosperous as a castle town.

Josaien is located in Sakurano-baba, at the foot of Kumamoto Castle, one of Japan’s

three major castles. It is a popular tourist attraction designed to enhance the appeal

of the old castle town and convey to visitors the food, history and cultural traditions of

the region from Kumamoto Castle, a symbol of the Kumamoto-city.

blossoms. Due to the Earthquakes in 2016, the Castle have heavey damages and many of Castle

buildings were destroyed. After that the restoration activities are being performed as fast as possible

and now Kumamoto Castle can be seen from the outside of the moats surrounding the castle.

A hot spring resort representing Kyushu, and is located in Kagoshima-prefecture along

the sea at the southernmost end of the Satsuma peninsula. It is best known for its
steaming sand baths along the beach, where bathers in a yukata, or Japanese bathrobe.

The Satsuma Peninsula which projects south from the southwest part of Kyushu.

To the west lies the East China Sea, while to the east it faces the Osumi Peninsula

across Kagoshima Bay. Near the southern tip of the peninsula is the 924-metre Mount

Kaimon and the hot springs of Ibusuki Hot Spring.​

of matchmaking and good fortune in love.

and Chiran Peace Museum for the Kamikaze Pilots.

Those Samurai Houses were built about 250 years ago. Their gardens are beautiful

desighned, with Mt. Hahaga-dake as the background. Other natural elements are

also incorporated, making the whole area resemble a scries of miniture of Japanese

gardens housed in boxes. Seven of the gardens are designated as natural scenic spots.

This museum exhibits precious materials such as pictures, letters, wills, articles and

memontos of the 1,036 Kamikaze pilots based in Chiran who perticipated in the Battle for

Okinawa towards the end of World War 2.  It also houses a No.3 type fighter aircraft, Hien.

The Station is the southern most railway station in Japan operated by JR, boasts a

breathtaking view of Kaimon-dake volcano to the front.

as a castle town.

belongings. The stone buiding which houses the collection has been desighnated on the

Over here, one can tour the old-fashioned Tshubobatake which leterally means a field of

Facing the Pacific Ocean with a beautiful coastline contains placed of natural beauty,

Enjoy a breathtaking panoramic view of the Pacific Ocean, the Sun Messe Nichinan has

Option : the following site can be arranged as an option.

You can enjoy sample wines and winery also can be visited

Japanese indigenouse religion. It is the supposed site of legend where Amaterasu, the Shrine

Sun Goddess, disturbed by her brother’s cruel pranks, hid herself in a cave, prompting the

other gods and goddesses to try and lure her out.

The narrow chasm cut through the rock by the Gokase River. The nearly sheer cliffs lining

a dragon where the stone twisted and flowed as it formed.

base of the gorge on a rental boat.The spot you can see waterfalls and the columnar shaped

located just west of the town center, is nestled in a grove of tall cedars. During the day

the shrine’s nondescript, unpainted buildings blend in naturally with the surrounding trees.

There is a story of Shinto origin in the Cave behind of Amano Iwato Shrine, and Amano

was built near the Cave where is place of the Shinto origin story.

All the wines are being made from locally grown grapes. There is the tasting corner, you can

Fukuoka-city has a long history as commercial town and castle town, and prospered as important

district to Asian Continent for many years.   Now, Fukuoka-city is the International bub of Kyushu,

the nation’s fourth largest economic zone. You can enjoy various things by selecting from the following.

The water-front resort area, only a 15 minute drive from Tenjin in the centre of Fukuoka-city.

all of which help make a modern urban landscape.

One of the must visit spots is the 234 metre high Fukuoka Tower. It  is the highest coastal
tower in Japan and is covered with 8000 two way mirrors. The observation room located at
a height of 123m offers a breathtaking and spectacular 360 degree panoramic view of
Fukuoka-city and Hakata Bay

central Fukuoka.The park is made up of several different areas including flower gardens, playgrounds,

an amusement park with ferris wheel, sports fields, a water park, a zoo and large open spaces and

The Japanese traditional Garden; it was originally built in the 1754 for Kuroda Tsugutaka who was

the lord of Fukuoka clan. You can feel Japanese traditional cultures and enjoy Tea Ceremony.

The urban living area where you can enjoy a resort lifestyle full of fun and entertainment.

There is a large shopping mall, a sports equipment store, a car accessories store, an interior

design shop, a baby specialty mega store, some restaurants, a Ferris wheel, and many